I do not host or maintain any of these online films myself; these pages just link to publicly available trailers, clips and full-length films at YouTube and Vimeo. If full-length films are posted without authorization, the links will be disabled after the service determines there is a problem.

Like “The Front Page” and “His Girl Friday” — but no comedy — this death-row drama starts as reporters gather to cover an execution, in this case the state’s first by electric chair.

Wikipedia’s page about The Underworld Story makes an interesting comparison with the better-known film below, both involving “a reporter that does anything for publicity for himself regardless of ethics”…

YouTube automatically aggregates references to frequently “clipped” films on title pages, such as this Ace in the Hole page. Also released as “The Big Carnival,” what was originally called “Ace in the Hole” stars Kirk Douglas as a newspaperman with one goal — to make it back into the big time of New York journalism after sliding down to smaller and smaller papers. An excellent restored version is available on a Criterion Collection DVD, including supplementary interviews and program notes in the form of a printed newspaper. Perhaps having the trailer and clips on YouTube will inspire some viewers to seek out the recording for those added features.

Sam Fuller, former New York Evening Graphic reporter, wrote the novel “The Dark Page” that inspired this film. Broderick Crawford is a tough tabloid editor whose Lonely Hearts Club Ball starts out as heartless exploitation — and leads to murder. His star reporter investigates clues that lead back to the boss. More info at Turner Movie Classics. The title sequence at YouTube has classic shots of 1950s presses rolling.

A DVD and online streaming version of this classic Humphrey Bogart film were available briefly, but its removal from Amazon suggests there were problems, or that a new, better edition is coming. I hope so.

The barroom “wake” for the New York Day after the staff gets the word the paper is about to be sold to its “wild and yellow” competition and, presumably, put out of business. Unfortunately, Bogart’s “It may not be the oldest profession, but it’s the best” speech to a young man interested in a newspaper career was cut from the end of this clip.

Bogart and Ethel Barrymore — as the editor and the publisher’s widow — discuss the paper’s big investigation (“We showed them how a real newspaper can function, and now we’re licked, baby”), and their marriages.

“You wouldn’t have had a wife if that newspaper had beautiful legs.”
— Barrymore

Sam Fuller’s trailer for “Park Row” plays like tabloid news itself… and includes every action scene from the film, which is really an old newspaperman’s affectionate period piece on the newspaper revolutions of the late 1800s, from the open-newsroom and “slot” copydesk to the Linotype, multiple daily editions, news stands and Pulitzer’s campaign to crowd-fund a pedestal for the Statue of Liberty. Those bits of craft and history are mashed together into one fictional editor and paper. Other than Liberty, another real-life event is Steve Brodie’s publicity-stunt jump off the Brooklyn Bridge — which becomes the new Globe’s first front page and helps inspire the new editor’s philosophy, explained in this clip: 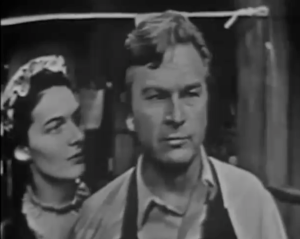 1953: Seldes and Albert as the Zengers

To my knowledge, jailed colonial printer John Peter Zenger’s story — a landmark in American press freedoms — has never been a feature film, but it was a very early (1953) made-for-TV movie, “The Trial of John Peter Zenger,” starring Eddie Albert and Marian Seldes. (Seldes is daughter and niece of two well-known writers, the critic Gilbert Seldes and his brother,  journalist George Seldes. George’s life story was told in the 1996 documentary, “Tell the Truth and Run,” with Marian among the narrators.)

See my discussion of two radio adaptations of the story: Remember Anna Zenger and Mother of Freedom.

The YouTube clip has just a couple of scenes from this Loretta Young and John Forsythe film about a New York couple taking over a small-town newspaper, based on the book It happens every Thursday by Jane McIlvaine McClary. See the NYTimes review, and more about It Happens Every Thursday at Turner Classic Movies. For comparison, listen to the Cavalcade of America dramatization of the Houghs’ experience running a weekly on Martha’s Vineyard in “Once More the Thunderer.” (As his Times obituary noted, Forsythe also played a newspaper editor in “The Captive City” (1952) the previous year. That, too, sounds like an interesting film (see its TCM synopsis), sharing a newspaper-versus-organized-crime theme with “Deadline USA.”)

Jimmy Stewart plays a photojournalist who is kept from doing photojournalism by a broken leg, but can’t suppress his curiosity, observer’s (or voyeur’s) eye and skeptical suspiciousness. His dedication to his career is also enough of an adrenaline rush to make him appear uncertain about marrying the beautiful Grace Kelly — until she begins to display the same kind of risk-taking, adventure-seeking attitude.

(Coincidentally, the author of the story upon which the movie was based, Cornell Woolrich, endowed a scholarship at the Columbia School of Journalism.)

[The YouTube copy has been removed.]
British journalists, for a change. As a bonus, a Mrs. Hudson who is not Holmes’ landlady and a Miss Watson who is not Holmes’ assistant. In fact, no Holmes, but you do get a pipe-smoking police inspector and competing reporters — in a plot similar to some U.S. battle-of-the-reporting-sexes films. “Social functions make me tired and I loathe the ‘smart set,'” says a society reporter who wants to compete with her boyfriend on the crime beat.

Sometimes a “newspaper movie” is all about the reporters; sometimes the reporter or editor is just a sidekick in a detective movie. In this case, the reporter is pure “observer.” In fact, the original Japanese film had no American characters, and had a slightly anti-American theme, since the monster was created by nuclear testing. So the imported version was cleverly edited  framing  the story through the eyes of an American journalist, played by Raymond Burr. As he mentions in the interview with Bob Costas above, the American crew didn’t even go to Japan: Burr’s scenes were shot in Hollywood, then spliced into the original. The copy writers for the trailer (above) must have worn out their thesaurus searching for synonyms for “exciting.”

The clip is a video review from “Shooting Down Pictures.” The full-length copy of Fritz Lang’s film that was on YouTube briefly has been removed because of copyright protests. Warner Brothers now sells a DVD of the film. The story was based on the 1953 novel “The Bloody Spur,” by Charles Einstein.
As IMDB says, “A serial killer has been killing beautiful women in New York, and the new owner of a media company offers a high ranking job to the 1st administrator who can get the earliest scoops on the case.” For my fall 2012 course, I’ve ordered the film through our university library, which also has (for authorized users only) access to the film script through an AFI database.

Life at a notorious gossip magazine.

Life of a notorious gossip columnist, one of many films over 30 years at least partly inspired by Walter Winchell; 2011 DVD in a Criterion edition:

Clark Gable played a variety of dashing and romantic young reporters in films of the 1930s and 1940s, including Frank Capra’s It Happened One Night. Now, in this 1958 comedy, he’s an older city editor at a crime-and-sensation-minded daily, suddenly confronted with a more modern image of journalism education by college instructor Doris Day.

The film is available on DVD; YouTube has a trailer and clips, some by Doris Day fans who just use stills from the movie over the soundtrack of her singing the title song, or her “competition,” Mamie Van Doren, singing “The Girl Who Invented Rock ‘n’ Roll.” (This film could give someone a master’s thesis in analyzing male/female stereotypes in the 1950s; unfortunately, while implied that Doris/Erica grew up around her father’s newspaper and had a journalism career of her own, we don’t learn much about women newspaper reporters. She has already moved out of the newsroom to be a college teacher.)

City editor Jim Bathgate (William Conrad) gives a departing intern a lecture in this clip from the somewhat mysteriously titled film, which starred Jack Webb, Dragnet’s Sgt. Joe Friday, as editor Sam Gatlin. Of course “–30–” is the old-time newspaper (and 19th century telegraphy) symbol for “end of story,” although that isn’t mentioned until the end of the movie. On its way there, the film’s story is of a single night’s work at a newspaper as deadline approaches and stories evolve — a missing plane, rising flood waters, a lost child. Two women journalists, one young, one older, play key parts in the story. Filmed more than a decade before Watergate, editor Bathgate’s speech (to former teen TV star David Nelson) still gets quoted in 21st century journalism textbooks, despite its “men” and “guys” 1950s sexism — and its reference to 1950s newspaper pricing:

“You know what people use these for? They roll them up and swat their puppies for wetting on the rug. They spread them on the floor when they’re painting the walls. They wrap fish in them, shred them up and pack their two-bit china in them when they move. Or else they pile up in the garbage until an inspector declares them a fire hazard!
But this also happens to be a couple of more things! It’s got print on it that tells stories that hundreds of good men all over the world have broken their backs to get. It gives a lot of information to a lot of people who wouldn’t have known about it if we hadn’t taken the trouble to tell them. It’s the sum total of the work of a lot of guys who don’t quit.
It’s a newspaper . . . and it only costs 10 cents, that’s all. But if you only read the comic section or the want ads, it’s still the best buy for your money in the world.” — editor Jim Bathgate (William Conrad)