This square dance was what really stuck the line “… On the Trail of the Lonesome Pine” in my head. I’ve since learned The Trail didn’t stop (or start) with the dance, but you can watch it, then sing along for fun while you read the rest of the story.

My film course (a non-credit MOOC) has led me to an interesting popular-culture chain of media, starting with a 1908 novel, The Trail of the Lonesome Pine, and wending its way to a 1913 pop song, an outdoor drama still performed each summer in Big Stone Gap, Virginia, and a singing square dance still done in New England, all available on the Web, especially in the Internet Archive and on YouTube, with separate Wikipedia pages for the novel, song, and film.

Because of the coincidence of the 1913 song’s centennial, here are some links and connections, mostly a celebration of the Internet’s varied ways of archiving media — and giving me ways to distract myself. (This page may be a bit of a jumble, with some duplication because of pieces cut and pasted from my movie course discussion site; I’ll try to come back and clean it up some day.)

The original song is more a product of the barbershop quartet era of sentimental melodies and harmonizing. Laurel and Hardy managed four voices between the two of them, with the help of a bung starter.

The words are sweet and sentimental and do use the name of the book’s heroine, June, a favorite of every barbershop rhyming dictionary. A bit of that melody is used behind the title credits for the 1936 movie, but the words are not sung. Instead, we get the (composed for the film?) song “Twilight on the Trail” with its reference to a “lonesome pine on the hill.”

The 1937 recording by Laurel & Hardy from their film “Way Out West.” (In the video clip, the very low and very high voices on the last verse both appear to come from Stan Laurel, under the influence of liquor and a knock on the head, respectively)
A search of YouTube will find many more singers and dancers on The Trail, from the Laurel and Hardy scene to a player piano roll, Rex Allen (with and without Brenda Lee), British ukulele strummers and New England square dance musicians. (Watch the dance or watch the caller Tony Parkes and musicians. Here’s Tony’s site, and here’s one for Ralph Sweet, whom I first heard call this dance in the 1970s.)

“On the Trail of the Lonesome Pine” (1936), the first big outdoor three-strip Technicolor film, played an important part in Scott Higgins “The Language of Hollywood” online “MOOC” course I’ve been taking, and is discussed thoroughly for its “restrained” approach to color in his book, “Harnessing the Technicolor Rainbow.” (Fox’s novel, a not-quite-western frontier romance, with men on horseback and a battle to establish law and order, had inspired earlier silent films, but I still haven’t seen them.)

I’d first heard the title “On the Trail of the Lonesome Pine” as the refrain of an old song. I remember Arthur Godfrey singing snatches of the catchy tune on his TV and radio shows in the 1950s. (Media students: Look him up!) And more recently, I heard the tune at Ralph Sweet’s New England square dances in the 1980s, particularly a “singing square” that used the original song’s refrain and encouraged the dancers to sing along on the line “In the Blue Ridge Mountains of Virginia, on the trail of the lonesome pine.” If singing while dancing doesn’t stick a tune in your head, nothing will. (More recently, the lyric set me to questioning whether the area mentioned in the book is rightfully called part of the “Blue Ridge,” which I associate with the ridgeline of the Blue Ridge Parkway a couple of hundred miles east. But “Blue Ridge” has two syllables and “Cumberland” three, and the song gets to say “…like the mountains, I’m blue.”) 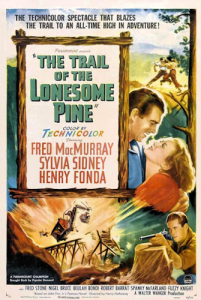 My first encounter with the movie wasn’t this film course, it was in Sharyn McCrumb’s novel, “The Devil Amongst the Lawyers,” set around the time the 1936 film came out. McCrumb’s characters blame the movie and the 1908 John Fox Jr. novel that inspired it for feeding outsiders’ unflattering preconceptions of Appalachian mountain folks.

After I read her novel, interested in her critique of 1930s journalists, I bought myself a copy of the movie on DVD. It starred Sylvia Sydney, Fred MacMurray and Henry Fonda, and the dialogue of “we-uns” and “furriners” and “green-up” (for springtime) got old in a hurry.

Hollywood’s uneducated and feuding mountaineers couldn’t have been a fair picture of this area in the 1930s, even if it was close to the truth in the era Fox wrote about — the 1880-1900 coal boom years in Southwestern Virginia. The movie pulled the characters out of those horse-and-buggy days and into “modern” times, almost in the way it did with the “Wild West” of 1930 singing-cowboy movies.

Today, Fox’s novel is available for free at the Internet Archive, Open Library, Project Gutenberg and a 35-chapter Librivox free audiobook version that read me to sleep for a couple of weeks.

For a 105-year-old novel about “progress,” “nature” and change, I rather liked the melodrama about the coming of the railroads and coal mines to the mountains. Despite the “Blue Ridge” reference in the song lyric, the story takes place in farther Southwestern Virginia and Southeastern Kentucky. The town of Big Stone Gap, Va., still celebrates Fox’s work with June-through-August outdoor theater performances of a play based on the novel. Unfortunately, I didn’t discover the theater page at http://www.trailofthelonesomepine.com/ until the season was over.

Here’s an “Appalachian Studies” resource guide for the film and novel: Http://www2.ferrum.edu/applit/studyg/lonesomepinesg.htm

One comment on “Trailing the Lonesome Pine — finding a musical centennial”